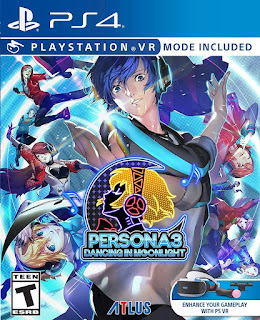 The members of SEES are startled to awaken in the Velvet Room, which has been remade into Club Velvet for a very special contest. Velvet Room attendant Elizabeth cheerfully informs the confused teens that, since they are soon to face particularly dark times, she has whisked them away for a cheerful dance competition... but when that excuse doesn't hold up under questioning, she admits that she has made a bet with one of her sisters that her guests could win in a dance-off, to be conducted in painstaking recreations of familiar settings: the school, the mall, and the various stages of Tartarus itself!

Though this is a rhythm game, care has been taken to keep characterizations spot-on. Most of the original voice actors return (timid Fuuka's original voice actress had already been replaced by Wendee Lee for previous spinoffs). In addition to the introductory and ending scenes, the game also includes Social Links - conversations between your protagonist and the rest of the characters, which you unlock as the game progresses. These mostly consist of light-hearted banter, but the characters are recaptured effectively, and there is some pleasure in seeing this usually broody bunch in a more laid-back scenario.

Dancing in Moonlight's primary mechanics are reasonably typical for a rhythm game. While the characters dance in rotoscoped animations, symbols float toward a ring at the edges of the screen. Some call for quick button prompts, others for holding a button in a slide, still others for moving one of the analog sticks to create a (vaguely annoying) record scratch noise (this last is more intuitive if you reconfigure it to be read by a press of the shoulder button instead). It is a clean, simple interface. Which doesn't mean that higher difficulties aren't challenging - The unlockable "All Night" mode initially seems to demand the impossible of your beleaguered digits. It just means that the controls don't get in the way of you playing the game.

The default settings require rapid finger movements, but the game allows you to adjust these - indeed, even encourages you to do so by tying trophies to certain adjustments. This allows players to slow down or speed up the rhythms, or allow the game to do all "record scratches" automatically, or reduce penalties for mistakes. These options should make the game more accessible to those with mobility issues than otherwise would be the case.

I approached Persona 3: Dancing in Moonlight with wariness. On the one hand, I discovered a while ago that I (surprisingly) enjoy well-made rhythm games, and the positive reviews were encouraging. On the other hand, it seemed... well, honestly, like a shallow cash grab.

It may be a cash grab, but it's not a shallow one.  From the moment the game begins, it feels infused with genuine love from its creators. The opening titles are catchy and overflowing with nostalgia.  The introductory scene, setting up the bizarre situation, is very funny, with all of the characters feeling perfectly in character (though Yukari's more antagonistic tendencies are toned down).

The gameplay is also increasingly addictive, to the point where I would sit down to kill just twenty minutes or so with a few tracks, and end up finding an hour had passed.  The dances are well-choreographed, with each character's style tailored to his or her personality.  The interface is clean, with instant feedback for every button press (and calls of encouragement from the non-dancing SEES members).  Finally, while not all of the music is to my taste, many of the numbers are flatly spectacular - none more than the group number set to the main game's original theme song, Burn My Dread, featuring each of the characters interacting with others, reminiscing and offering encouragement as they dance together at the site of the main game's final battle.

I thoroughly enjoyed the Social Links. Some are funny: Aegis and Elizabeth discuss ways to incorporate heavy weapons upgrades into her dance routines; Junpei becomes increasingly self-delusional about his prospects as a superstar; Elizabeth ruminates about how she can either hide this competition from her long-nosed master or, failing that, blame it on her hapless brother.

The game is very good, but not perfect. The PSVR mode, which allows you to explore your friends' rooms once you unlock them, is so blatantly tacked-on that I half-expected to see "SONY WANTED US TO HELP SELL HEADSETS" running across the bottom of the screen. PSVR owners will have some fun the first time they engage this mode, as each room has been carefully designed to reflect the character's personality. But since it only takes a few minutes to thoroughly explore a given room, it wont' take long for many players to determine it's not worth the bother of switching the headset on.

The soundtrack is terrific, of course... But it does feature too many remixes of the same songs (at least three versions each of Mass Destruction and Burn My Dread, for instance). Greater variety is available by purchasing DLC tracks - including the game's hardest offering, the equal parts maddening and hypnotic Tanaka's Amazing Commodities. Still, at least a few of those feel like they should have been in the base game. The availability of major supporting character Shinji is entirely via DLC, for instance - though once you buy his track, his voice pops up making comments with the other characters in the base game's songs, indicating that he was in the code the entire time.

Dancing in Moonlight boasts intuitive gameplay, a good soundtrack, and fantastic graphics. The HD recreations of settings I had previously viewed mainly in fuzzy PS2 form are the best argument one could make for an HD remaster of Persona 3. The characters feel entirely like themselves; and even though the tone is overall fairly light, I still came away feeling like I knew them just a little bit better after playing this.

A note about the score: Yes, I'm awarding this game a higher score than Persona 3. It's a different genre - rhythm game vs. JRPG - and as such, has a different set of ambitions and limitations. It is clearly a less emotional experience, for example. However, unlike RPGs, the rhythm game genre generally has no time for characterization of any kind, let alone the kind of detailed character work seen here. Even very good rhythm games frequently have interface issues... which are all but absent here. By the standards of its genre, this is a very fine game - and quite close to being a great one.

Most Popular Posts This Month